That’s a statement that Philadelphia Revolution defenseman Tiger Bjornlund tries to embrace out on the ice for the Junior A squad.

During a recent interview, the second-year Revolution skater expressed his admiration for a defense-first attitude and the value a defensive-minded approach can have for a team.

“One thing I take pride in is the defensive side of the game for sure,” said Bjornlund. “It doesn’t always show up on the stat line or the EliteProspects page or wherever, but if you’re able to contribute defensively, game in and game out, then hopefully it’s something that can help contribute to wins.”

The Revolution have utilized the 20-year-old in just about every facet the game offers whether it’s full strength or on special teams. With the likes of Bjornlund, it’s also no surprise that Philadelphia is currently in a playoff position for the Eastern Hockey League, ranked sixth in the league for goals-against per-game (2.59) and fourth on the penalty kill (86.6%). 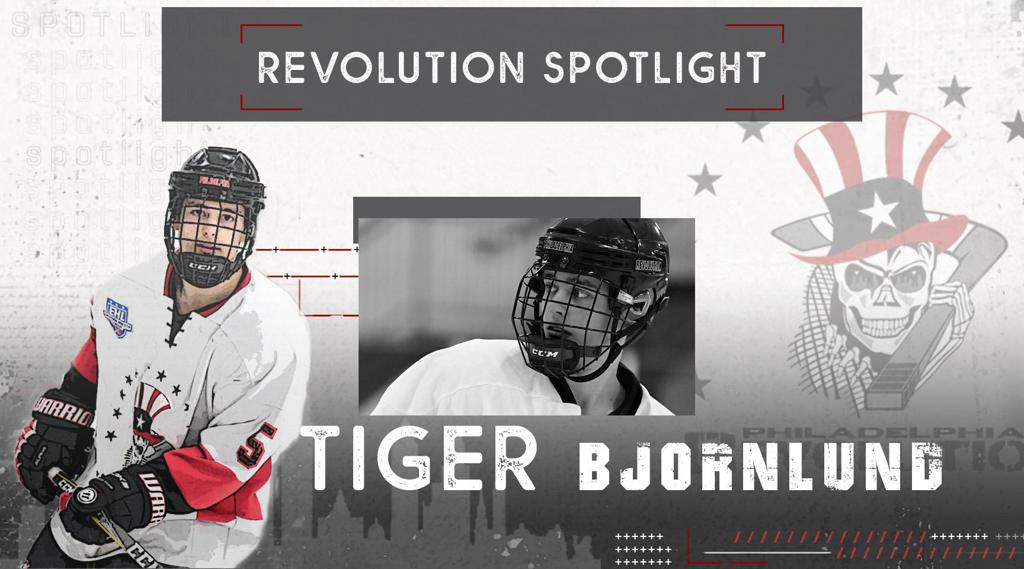 While Bjornlund doesn’t lead the team in points, the Bethesda, MD native understands the bigger picture and Philadelphia’s goal.

“Like I said, you may not see it on the stat line but they say ‘defense wins championships’,” said Bjornlund. “And that’s something I’ve worked really hard on and the reason I’m a defenseman because that’s how I can contribute.”

No. 5 for the Revolution sees plenty of ice time on a nightly basis and deservingly so, but keep in mind that the left-handed shot jumped from the “AA” level to Junior A hockey just two years ago.

Head Coach Jon Rogger explained the process and why the Revolution pursued the dynamic blueliner. After attending a summer skate in Maryland two off-seasons ago, there were a few characteristics Bjornlund displayed which sparked the coach’s interest.

“The thing that stood out to me right away was his smooth skating style and his ability to see the ice and make plays all over,” said Rogger. “He was making tough plays look simple and I knew his style would fit in nicely with our D-core.”

It seemed that the transition from “AA” to the Junior level was a considerable adjustment at first for the youngster, but Bjornlund’s journey to the Revolution from Maryland is admirable.

“I played ‘AA’ my whole life growing up and played High School, so it was a pretty big jump for me to the Revolution and Junior A hockey,” said Bjornlund.

“Part of the reason I picked the Revolution was because I really felt like coach Rogger and the staff put a lot of faith in me and believed that I was ready to play Junior A hockey coming out of ‘AA’ and High School; where some of the other teams I talked to wanted me to play Premiere or another year of U18 and didn’t think I’d be ready, but the Revolution believed I was ready and I hope I proved them right.” 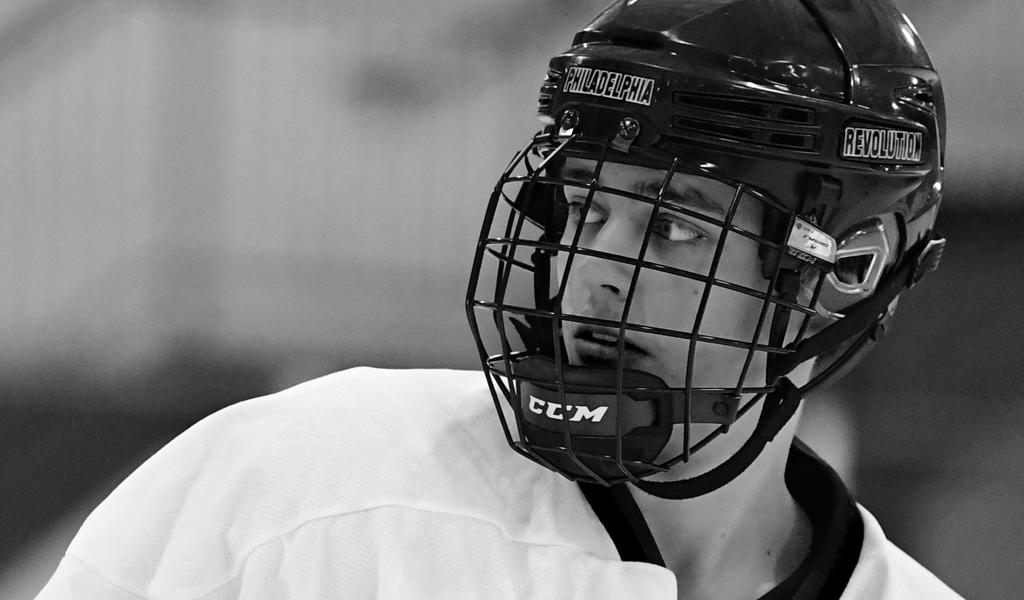 Rogger also mentioned how Bjornlund has improved over the past season and since joining the organization.

“The thing I noticed the most is that Tiger's confidence is through the roof right now,” said Rogger.

“Whether it's at the beginning of a game or in the last 60 seconds, he demands the puck. Tiger is a very humble person and isn't afraid to put the team on his shoulders when the game is on the line. It's much different than a year ago where he was fighting just to stay in the lineup.”

Bjornlund would probably agree with his head coach when it boils down to his demeanor out on the ice.

“I think I earned my spot in the lineup last year for my defensive play,” said Bjornlund, also hinting that he had to “fight” for his spot during his rookie season.

“I think coming into my second year I wanted to play with a little more confidence and jump up into the play a little more and add more of an offensive element that I thought I could bring.”

While Bjornlund is not a “stat line” type of player, he did surpass his point totals from last season (18). The Blueliner has clearly improved and met one area of his goal for the 2019-20 campaign – considering he’s recorded 24 points and counting in 30 games (5g-19a-24PTS).

Interestingly enough, Bjornlund’s teammates seem believe his offensive capabilities have always been a highlight of the defenseman’s game. Forward Daniel Pimenov has been teammates with Bjornlund for a number of years, which dates back to their childhood days. Keep in mind that the Pimenov’s are Bjornlund’s billet family this season.

“What impresses me about Tiger is his vision for the game,” said Pimenov. “Tiger always knows where his teammates are going to be and sets them up for goal-scoring opportunities.” 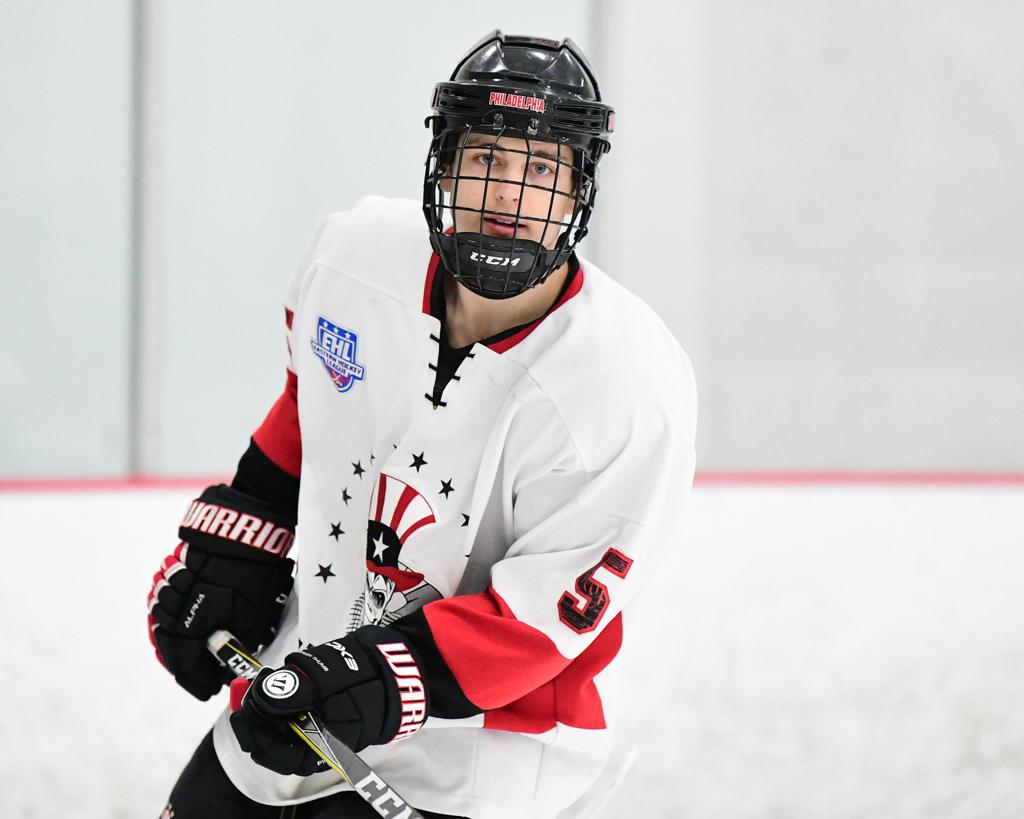 “I've played hockey for about 14 years and he’s one of the smartest players I’ve ever played with,” said Tosti.

“Tiger plays a very unique game. He’s very agile and speedy. He knows exactly what he wants to do with the puck before he gets it. He’s great on the powerplay and penalty kill. He’s also a leader in the room that guys respect on and off the ice. He will be a huge part to us hopefully winning the championship this year.”

For the record, Bjornlund’s eight power-play points (3 goals, five assists ) this season are tied for the most on the Revolution.

In addition to his talent level on the ice and leadership qualities, Rogger, Pimenov and Tosti all complimented Bjornlund’s bright mind.

“Tiger is a very bright person both on and off the ice,” said Rogger.

“His test scores are off the chart and he can get into just about any college he wants to attend. I think this is a big reason why he has become the player he is. He studies the game and always knows where to be and what to do. He's definitely a quarterback for us on the back end.”

Away from the ice, Bjornlund considered himself as a “book guy” and enjoys reading former NHLer’s autobiographies or books on leadership.

“I like books that are applicable to me,” said Bjornlund. “Like team cultures and how organizations and sports teams became successful – what makes them have really good cultures what makes a really good captain and leader; a lot of stuff that not only applies to hockey but other things apply in my life.”

“Culture” is also another aspect that Bjornlund has embraced and appreciated since donning a Revolution sweater. He also believes that type of positive dynamic in Philadelphia starts at the top with the team’s leaders and staff members.

“I think we have a really good group and really like our leadership,” said the blueliner. “Our captains have done a great job with leading the group and I think it’s a great a team from an off-ice standpoint for sure.”

Bjornlund likely speaks on behalf of his teammates on the relationship the staff has established with the team and their overall approach to succeed.

“It starts with the grind that we put in and that they (staff) lead. When you put in the effort at something for two to four hours every day, you’re going to get better at it. They do a good job at installing that work ethic – it’s not optional – they expect that if you’re coming to work at the rink every day then the best effort is needed, and they believe that if you don’t do that then you’re not going to be able to have success.”

It’s safe to say the Revolution are glad they believed in the defenseman two years ago when most perhaps didn’t and provided him the opportunity to grow with the organization. Bjornlund plans on attending and continuing his playing days at a college institution next fall.