It’s never been an easy task for a hockey player that’s ever strapped on the goaltender’s pads and stood between the pipes.

While some goaltenders may not admit a game’s outcome can solely fall on a goaltender’s shoulders, Junior A netminder Anthony Del Tufo is the first to accept that type of pressure and responsibility.

His perspective on the goaltender position is unique, but arguably exactly the way a coach prefers.

“We can determine the outcome of games whether we play well or have a tough day,” said Del Tufo. “We’re a crucial player on the ice.” 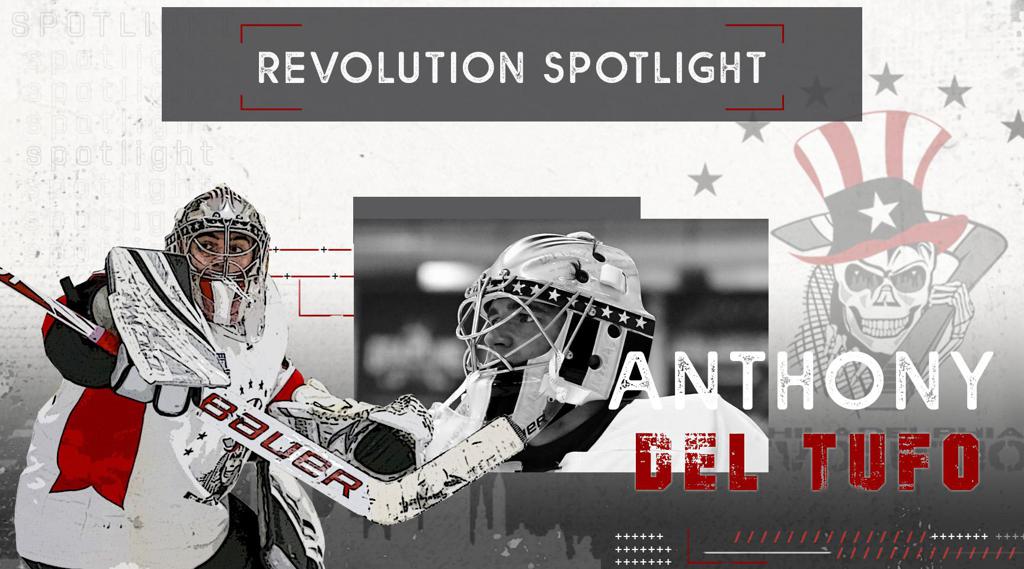 It’s one aspect to admit the pressures of throwing on the mask, but there’s another dynamic when it boils down to performing under those types of circumstances. The 20-year-old’s coaching staff, in head coach Jon Rogger and assistant coach Joe Matiskiel, believe his approach and calm movements in net are some of his biggest assets.

“His poise and worth ethic,” said Matiskiel when asked about Del Tufo’s biggest strengths. “He doesn’t get too high or low on the ice. He stays in the moment and maintains focus.”

Rogger expressed that Del Tufo is “as quick as a cat” in net.

“What makes Anthony such a good goalie is that he's quick, athletic and very competitive,” said Rogger. “He moves around better than most goalies I have had and knows how to play the puck.”

Matiskiel, a former collegiate goaltender, also spoke highly of Del Tufo’s competitive edge and character qualities away from the ice.

“Off the ice he very mature and more than most at his level,” said Matiskiel.

“He’s one of the first ones in the building every day and one of the last to leave. Over the last month or so, he’s stayed at the rink and asked to go over more film and do the extra work in the video room. Those are the kind of guys you gladly go the extra mile for and it’s certainly helped his game.” 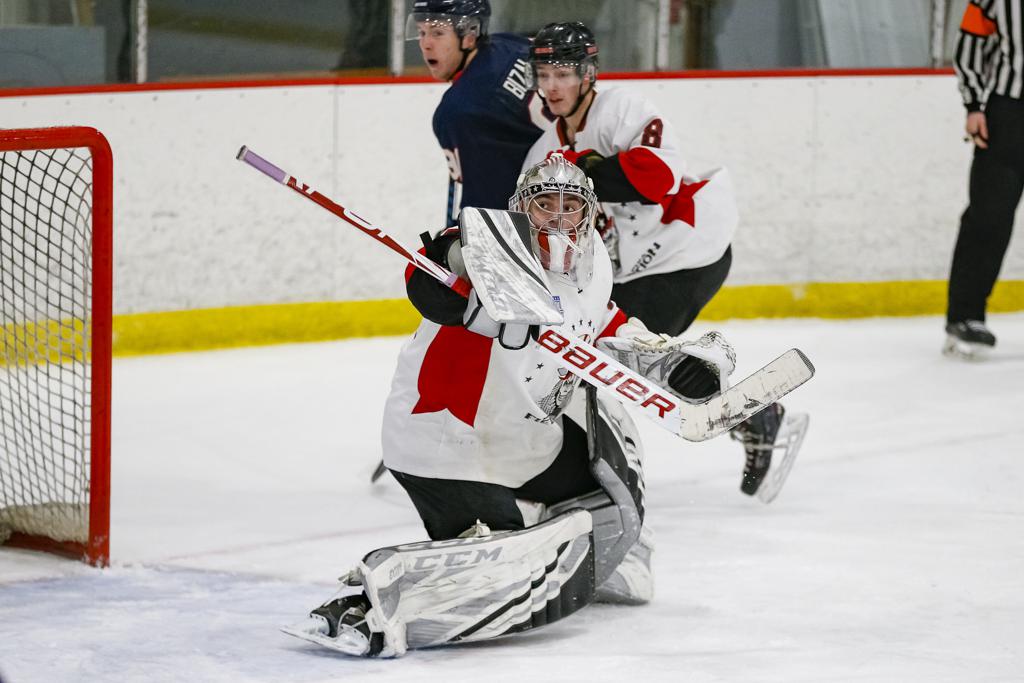 Paying attention to detail at all areas on the ice seems to intrigue the Livingston, NJ native.

“We can see plays develop the whole game, which I think is interesting,” said Del Tufo when asked what he enjoys most about goaltending. “I feel like we’re an integral part of the team. If anyone ever needs or has a question then I think the goalie is always ‘the guy’ to go to because we’re always analytical and think very logically.”

The Revolution coaching staff was also familiar with the 5-foot-9 goaltender prior to this season.

“The first time I heard of Del Tufo was when he played against us last year when he was with Maryland,” said Rogger.

“He stood on his head and stopped over 50 shots against us and we took notice. As a staff, we followed him throughout the season and when we found out he was looking for a new team, I reached out to his goalie coach, who is a close friend of mine. I helped run a goalie camp that he was attending and got a chance to sit with Anthony and get to know him. The rest was history.” 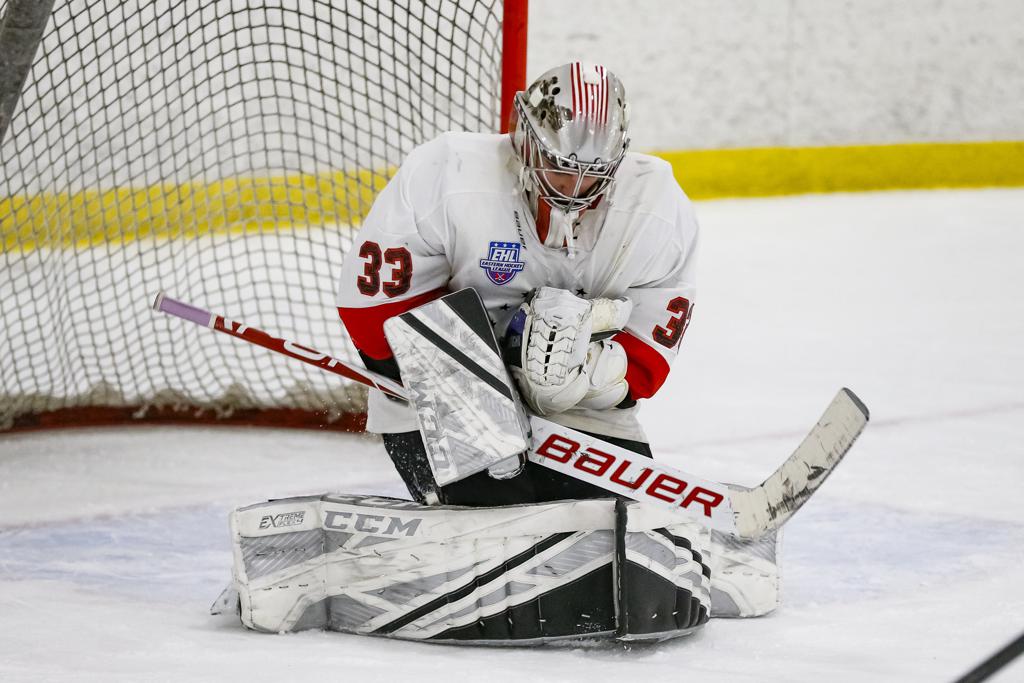 Matiskiel was familiar with the netminder in another fashion. The Junior A assistant coach had previously coached at the youth and High School Hockey levels in New Jersey prior to the Revolution.

“He's a Jersey kid,” said Matiskiel. “He played his youth & High School Hockey in Jersey and was in our league for some time last season.  We definitely knew who he was and what he could do, and got to know him better over the offseason.”

Speaking of Philadelphia’s rival in the EHL, Team Maryland, Del Tufo earned a call up to the organization’s North American Hockey League tier last season. The NAHL is usually on most player’s bucket list to reach.

“I ended up getting a shot when a goalie went down (injury) and I ended up with the start the following game,” said Del Tufo. “A few weeks later I started back-to-back games and we swept the opponent. I think that’s when I established myself as a player that could play Tier II.”

Del Tufo was even approached by young fans during postgames after collecting victories in the NAHL.

“Afterwards when you have kids come up to you and ask for your autograph, it was pretty special.”

Keep in mind that last season was Del Tufo’s first year of Junior Hockey. No. 33 shared his thoughts on what the adjustment was and can be like for future Junior goaltenders. He expressed gratitude for his billet family, too. 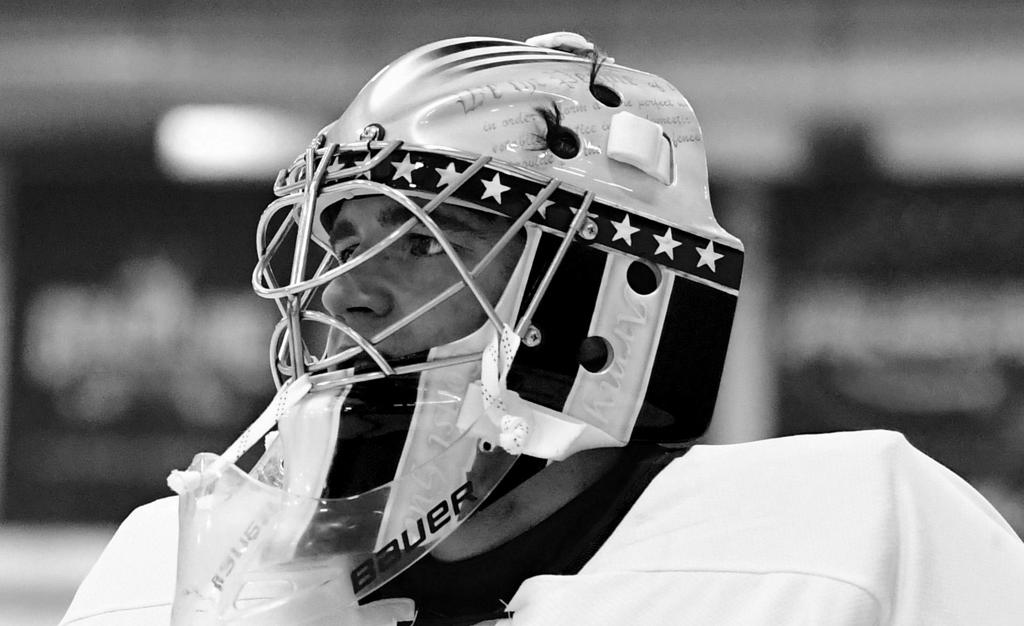 “It was definitely a big jump to Junior Hockey, especially with the amount of time you were spending at the rink and just the overall pace of the game,” said Del Tufo.

“I had a great experience with Team Maryland, especially because of my billets. My billets were awesome and treated me like I was one of their own. I will be forever grateful for my billet family.”

Additionally, Rogger and Matiskiel weren’t the only members of the Revolution who were familiar with Del Tufo prior to this EHL campaign. The team’s leading scorer in Brayden Patricia was former teammates with the goaltender.

“We went to High School together at Morristown-Beard School. We both were pretty good friends during school. We didn’t think we would play together after High School but everything happens for a reason.”

The hockey community and Revolution family might notice that Del Tufo is also efficient at playing the puck, which is a trait that’s usually a challenge for most goaltenders. Patricia was quick to point that out about his longtime friend.

“The thing that impresses me the most about Del Tufo is how he handles the puck,” said Patricia.

“I’ve never played against or played with anyone who can move the puck the way he does,” added the Revolution assistant captain. “If a forward is coming on him, you don’t know what he’ll do with the puck. He might put it through the player coming at him and make a good play turn into a beautiful one.”

Del Tufo also expressed how he strives and believes goaltenders should be a “third defenseman” out on the ice to help a team win.

Others might also notice Del Tufo’s decorative mask. Patricia acknowledged the prideful bucket and jokingly compared it to others around the EHL.

“Del Tufo’s paint job is for sure the best in the league,” said Patricia. “I don’t think anyone even has a mask painted in this league. It really is beautiful.”

While Del Tufo will likely strap on the pads next at the NCAA level, he’s also focused on life after hockey.

“My whole family is teachers,” said Del Tufo. “I just love to teach and get to know others.” The youngster spent time last season coaching and mentoring young goaltenders in Maryland, and hopes to be a teacher or coach one day.

Del Tufo also spoke highly of his mentors with the Revolution.

“I think with coach Joe and (Chirs) Kanaly having a goalie background it’s really gone a long way for all of our goalies,” said Del Tufo. “Kanaly has always done a good job at challenging me to improve.

Del Tufo was recently named Warrior Goaltender of the Week (Feb. 3-9), and currently owns a .932 save percentage in addition to his 10 wins on the year.

His future team won’t only gain a goaltender with a sweet mask, but a third defenseman that’s calm and composed between the pipes.