Philadelphia, PA – The Junior A team not only defeated the Jr. Flyers on Wednesday by a 3-1 score, but officially clinched a top-three seed for the Mid-Atlantic Conference’s 2020 playoff picture.

Time can only tell where the Philadelphia Revolution finish within the top three spots for the MAC. The Revolution enter the weekend tied with the Connecticut RoughRiders for second place in the standings (56), but do have two games in hand over Connecticut. The recent matinee victory also placed the Little Flyers on the outside looking in for a top-three spot in the MAC – the highest the Little Flyers can finish is fourth place.

That leaves head coach Jon Rogger’s squad with an advantage moving forward for the remainder of the season, and hopefully, Philadelphia can solidify a top-two spot in the standings while earning home-ice advantage in the first round of the playoffs. 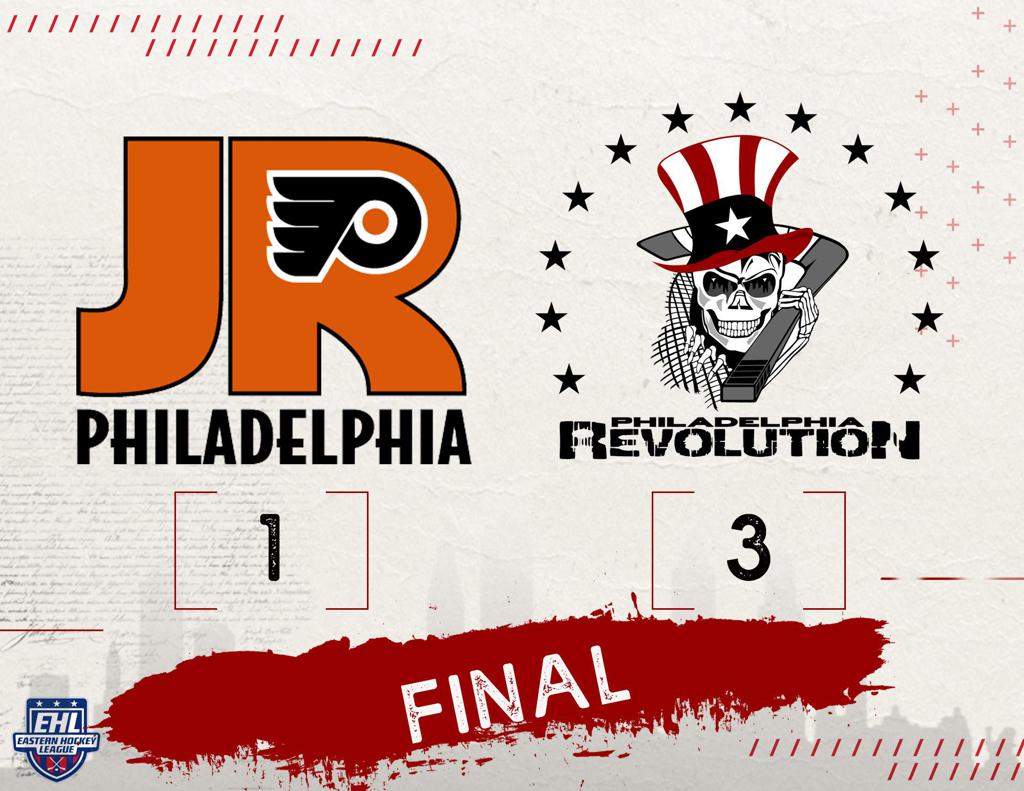 It seems that a contest between the Jr. Flyers and Revolution is always a hard-fought battle on the ice and regardless of where the teams sit in the standings. That was evident again on Wednesday while the Revolution faced some minor adversity.

Rogger’s team was missing three top skaters with the likes of Mark Tosti, Anthony Bench and Jordan Sgro. The trio has combined for 97 total points on the year.

There were two other familiar faces on the score sheet that helped contribute towards the win. Trevor Clemson opened the scoring when No. 96 netted a power-play goal 13:02 into the first period. The one-timer was fed off a swift backhand pass from Johnny Pearson below the right circle, who collected the puck after a Brandon Crowther face-off win. 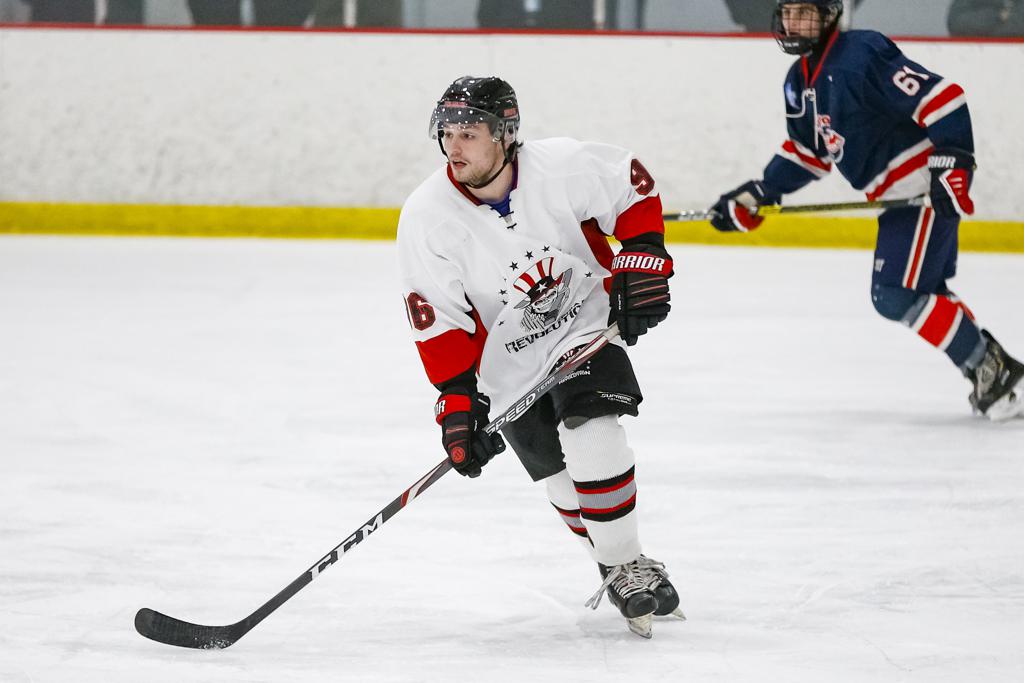 While the orange and black responded with a power-play goal of their own, forward Saava Smirnov netted his fifth goal in the Russian native’s last three games. The play started with linemate Matt Meli chipping the puck in the near corner to Brayden Patricia, who then fed Smirnov in the high slot.

Smirnov pulled the puck back and went through a Flyers’ defenseman to release his low snipe off the post and in.

Without three of the team’s top point-producers, the contest also presented an opportunity for other players.

Depth skaters were called upon and rose to the occasion for Philadelphia, which in large part helped earn its second win this season vs. the Jr. Flyers. Let’s not forget that defenseman Michael Kubachka was placed on offense for the day and settled in nicely centering Justin Gusso and Daniel Pimenov. 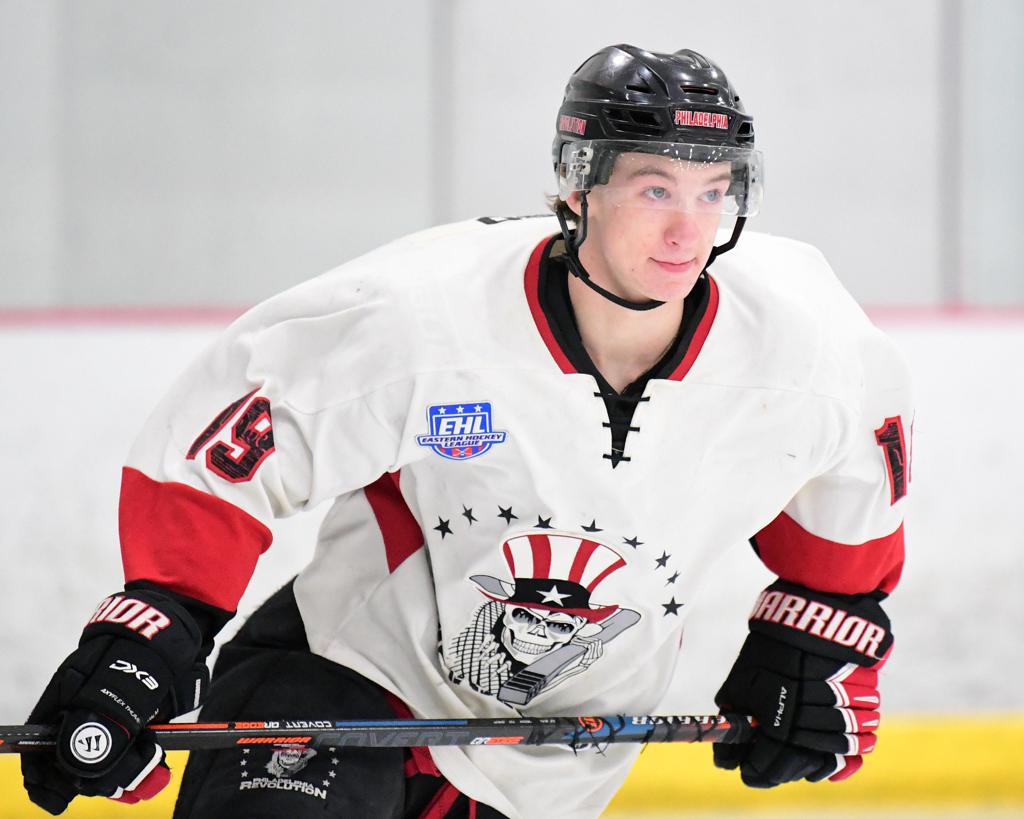 Coach Rogger acknowledged the contributions from his depth line.

“Our fourth line was probably our most productive line in the sense that they brought energy and brought physicality, and that’s what we need,” said Rogger in reference to Gusso, Kubachka and Pimenov.

“Obviously when other guys are not playing at their ‘A’ game - it’s good for guys that don’t normally get in the lineup to step it up and they definitely did today.”

Gusso also commented on what the line’s role is on a nightly basis, shift by shift.

“Our line plays well by keeping it simple and just doing the little things right,” said Gusso. “We really take pride in doing those little things like getting pucks deep, mashing their guys down low, get shots to the net and anything that can gain momentum for our team – that’s our job.”

Let’s not forget about Joshua Haines who netted his first career EHL goal. The tally came off a tip-in from a Smirnov feed during the second period, after Haines drove the net hard on an odd-man rush. The assurance goal was the last tally for the contest.

Revolution Goaltender Anthony Shrum recorded 26 saves on 27 shots and earned his eighth win on the year. Shrum now owns a .926 save percentage and 2.26 goals-against average.

Philadelphia enters a 10-day break with a three-game winning streak, but also realizes the significance of being focused at this time of the year.

“I think we’re focused on winning and it’s getting closer to the playoffs, so everyone knows their job,” said Gusso.

“It’s really time to bare down away from the ice, at the rink, during practice and games, we have to do all the little things. The vibe is good, we all gel and we’re just trying to win a championship together.”

The Revolution resume action for a pair of home games starting on Saturday, Feb. 22, when Junior A hosts the Philadelphia Little Flyers for a 6:00 p.m. contest. The two MAC rivals will face-off again the next morning at 10:45 a.m.