Philadelphia, PA – It was an entertaining weekend for all teams that skate out of the Revolution Ice Gardens and don a Philadelphia Revolution sweater.

The 2005s and 2007s sought to rebound against teams that defeated them earlier this season, while the 2006s aimed to gain momentum before skating at the New Jersey National Invite Super Series this weekend. At the Junior level, the Eastern Hockey League Premier team battled with the New Jersey 87s in a contest that entailed overtime.

Let’s drop the puck on another edition of Around the Rink. 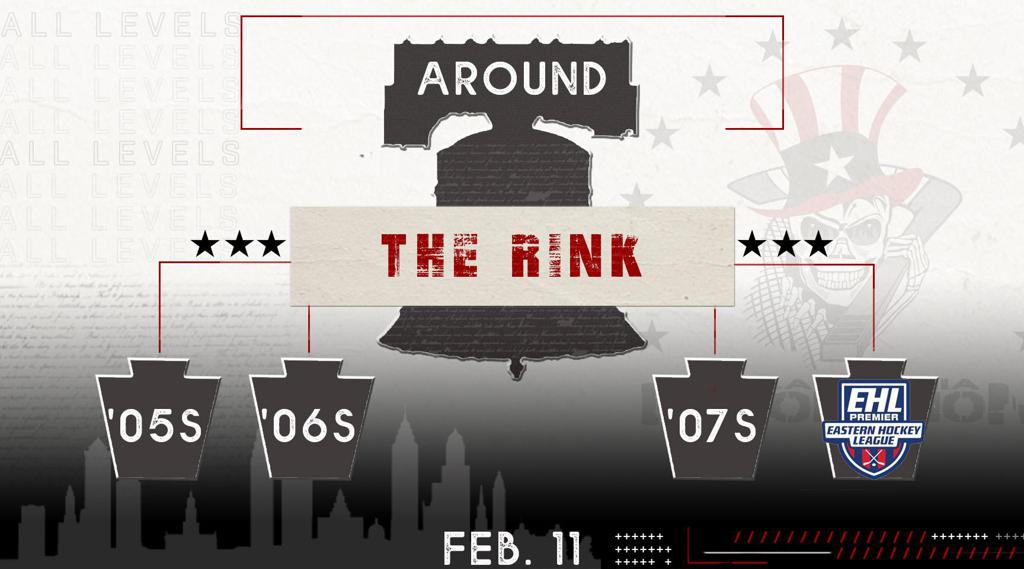 While the ‘05s, unfortunately, experienced canceled games by opponents, head coach Jon Houk’s squad still skated in one contest over the weekend.

The youngsters collected a road victory after they took down Virtua by a score of 3-1 on Sunday.

The Revolution were down one goaltender and two defensemen due to injuries, but that didn’t hold back the rest of the team from rising to occasion for a key contest. After dropping a game earlier in the season to Virtua, Philadelphia had this game “marked” on their calendars.

“The boys played a complete game from beginning to end and controlled the pace of the play for a majority of the game,” said Houk.

The Revolution’s power play also seemed to be a difference-maker. Thanks to Ryan Desmond and Matthew Giordano, Philadelphia executed twice on the man advantage. Desmond also finished the contest with an even-strength goal.

Goaltender Luke Hoffman continued his “tremendous” play between the pipes, and recorded 17 saves on the day.

The ‘05s are set to participate in the Super Series this weekend, where the team is scheduled for five games.

Sat. vs Protec Ducks at 8:30am | Mennen Sports Arena

The Revolution’s first contest was against the Mercer Chiefs, which resulted in a 3-3 tie. Philadelphia then followed up its first game with a 6-0 shutout victory over the Red Bank Generals.

On the offensive side of the puck, an impressive note is that seven different skaters found the back of the net over the weekend and 11 players earned at least one assist – you can do the math.

“So many different players contributed throughout the weekend and not just on the scoresheet,” said Rossi. “That is the mark of a team heading in the right direction.”

Matt Conforti led the Revolution with three tallies and two helpers, while Kevin Koles recorded one goal and chipped in three assists. Additionally, Alex Gibson was able to cele after he found the back of the net and earned two assists.

Rossie also commented on Koles’ dynamic play from the weekend and what it’s meant to the team throughout the season.

“Koles played both offense and defense this weekend for us and really showed his versatility,” said Rossi. “Having a player that we can plug in anywhere on ice is a tremendous asset. Kevin’s teammates joke that he is our third-string goalie.”

“His vision and creativity on the ice are impressive,” said Rossi. “It starts with his passion for the game.”

Let’s not forget about Jake Rossi between the pipes and his blueliners. Rossi and the defense-core earned the shutout against Red Bank – which is always a team effort.

The ‘06s are also headed to the Super Series this weekend. The team has a full slate of tough games scheduled against the Nashville Jr. Predators, Florida Alliance, Carolina Jr. Hurricanes and New Jersey Hitmen.

While the ‘07s join the other Revolution teams this weekend at the Super Series, head coach Andrew Ross’ team recently earned a statement win.

The Revolution defeated the Woodbridge Wolverines, 2-1, while the Wolverines goaltender almost refused to let Philadelphia score with his quality play all game.

Still, Philadelphia’s “team effort” prevailed and in large thanks to Cole Breen’s stellar play in net. One-goal games are never easy, especially for both goaltenders on the ice.

On offense, the trio of Kevin McGinley, Joe Sldobodrian and Blake Beaudet continued their success. The linemates will also look to ink their names on the score sheet often this weekend, considering that the team has five games on the schedule.

The EHLP team dropped its second-straight contest against the New Jersey 87s, but portrayed a commendable comeback.

After trailing 2-0 entering the third period, the Revolution managed to erase the two-goal deficit and tie the game. Jaredwagenmann scored 8:17 into the period which cut the lead in half, and also marked his 10th goal on the year. The game’s final frame then progressed without either team finding the back of the net until the closing seconds.

The Revolution’s Rocco Salvato scored the game-tying goal in dramatic fashion, after No. 13 netted the tally with 50 seconds remaining in regulation. The clutch goal forced overtime, but it was New Jersey that earned the game-winner 3:15 into the extra frame.

Goaltender Jake Stern displayed another valiant effort between the pipes. Stern recorded 41 saves and has posted 40 or more saves in a game on four occasions this season.

Philadelphia resumes action again vs. the 87s on Saturday at the Middletown Sports Complex for a 4:45 p.m. puck drop.