Philadelphia, PA – The Junior A squad picked up its second win against a top conference foe in less than five days after the Philadelphia Revolution defeated the New Jersey 87s, 3-2, on Saturday night.

The victory marked the second time this season that the Revolution took down the 87s, and just the third occasion in which New Jersey dropped back-to-back contests this season. There was also an exciting and genuine aurora surrounding the game.

“It was definitely a playoff atmosphere on the bench and in the stands,” said head coach Jon Rogger. “We knew going into the game that we would have our work cut out for us, so every play that happened, guys were on their toes.” 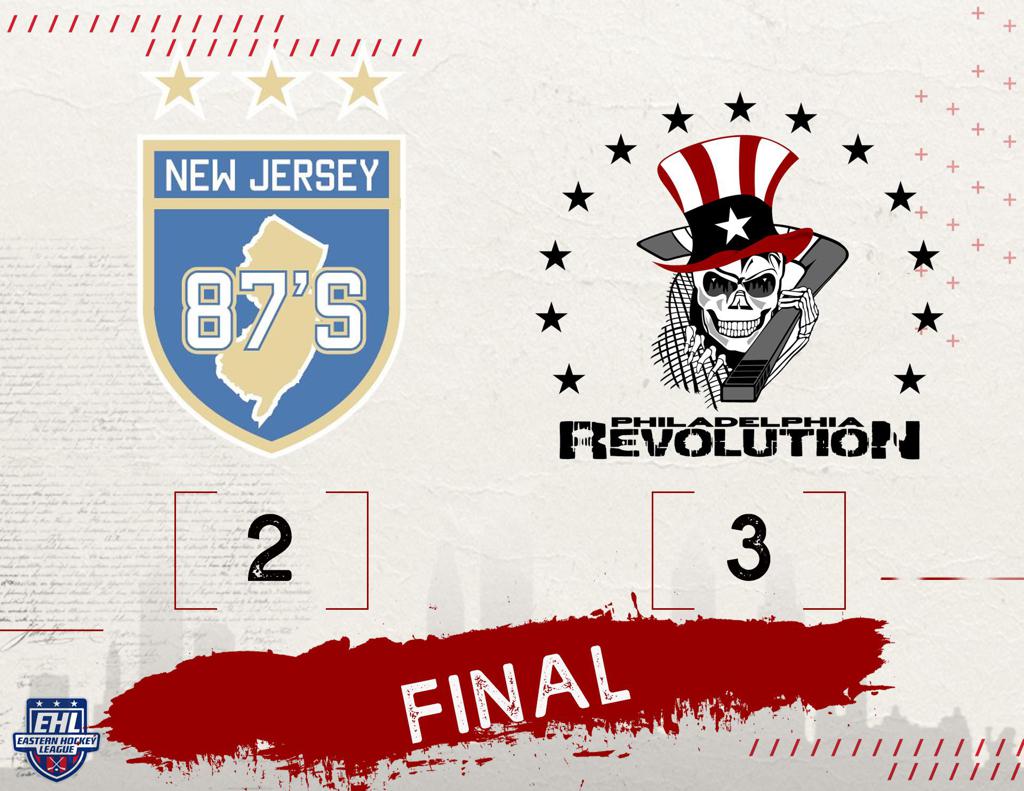 While the 87s opened up the scoring less than three minutes into the contest, the Revolution answered back with two goals during the opening frame. Defenseman Levi Wright netted his third power-play goal on the year and saw Saava Smirnov and Matt Pasic earn helpers on the tally.

Forward Mark Tosti inked his name in the goal column for the first time since the Revolution last defeated New Jersey back on Dec. 14 at home. Trevor Clemson picked up the lone assist on Tosti’s 16th goal for 2019-20. Additionally, No. 10 has three goals and four assists this season against New Jersey.

The 87s wasted no time tying the game, though. Again, New Jersey opened up a period immediately with a goal. The 87s’ Jackson Oleson scored a power-play goal 53 seconds into the second period. Though, it was Philadelphia that earned the advantage in the special teams’ department. The Revolution killed off 10 of 11 New Jersey power plays and finished the contest two for three on the man advantage. 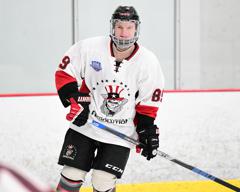 While Rogger preferred his team to stay out of the box less, the head coach also credited the Revolution's penalty kill. Rogger believed that the “forwards were excellent on the penalty kill” and that the defensemen were “excellent breaking up plays" all night.

The two Mid-Atlantic Conference rivals then wouldn’t find the back of the net for another 15 minutes of action.

Philadelphia’s Brandon Crowther netted his team-leading fifth power-play goal on the year, after Smirnov earned his second assist for the game. George Boyle also chipped in a helper on Crowther’s clutch tally, which stood as the game-winning goal after a scoreless third period.

No. 89 expressed praise for his teammates during the sequence that led up to the game-winner.

“It starts with Brian and Sean Gary keeping the puck in at the very start and Saava and Boyler dancing on the blue line,” said Crowther. “I just saw an opportunity for a tip (in) and luckily Boyler saw it, as well.”

Still, if one looked at the game’s scoresheet, fans will notice the 87s outshot the Revolution by a total of 47-22. Philadelphia goaltender Anthony Del Tufo earned his second-straight start and victory between the pipes.

No. 33 turned away 45 shots overall but came through with the timely saves. Del Tufo shut the door on New Jersey after stopping all 18 shots he faced in the third period. 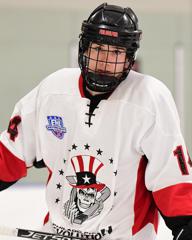 Rogger believed the big win was a 21-man effort but hinted that the team’s goaltender was a key factor.

“It definitely was a team effort and there wasn’t just one guy that stood out,” said Rogger. “Del Tufo was the biggest reason for our success last night.”

While Philadelphia improved to 12-1-1 at the Revolution Ice Gardens for the 2019-20 campaign, the Revolution are now 7-2-1 in their last 10 games. Blueliner Levi Wright believes the team’s last two victories act as a much-needed boost for the Revolution's morale.

“Honestly, that win couldn’t have come at a better time in the season,” said Wright.

“We’re trying to catch up to the 87s who have 60 points (in the standings), so it was a four-point swing. Coming off a big 6-1 win against the RoughRiders, our confidence couldn’t be higher now as we head into the playoffs.”

The Revolution resume action on Wednesday at home when they host the Philadelphia Jr. Flyers for a 12:00 p.m. puck drop.