February plays role of busy month for all levels

Philadelphia, PA – The second edition of Around the Rink focuses on the Eastern Hockey League’s Premiere team, the 2005s, 2006s and 2007s.

The EHLP squad enters the first full week of February in third place for the Mid-Atlantic Conference, but the team did fall to the New Jersey 87s on Sunday at the Revolution Ice Gardens. New Jersey took down Philadelphia by a score of 8-6 on Super Bowl Sunday and the loss marked the fourth defeat the Revolution have suffered this season against the foes.

The Revolution were one-for-two on the man advantage, while killing off all six New Jersey power plays. The first period alone witnessed a combined six goals. Daniel Pimenov and Carter Jones opened up the game’s scoring, and then youngster Matt Meli found the back of the net on the power play later in the frame. 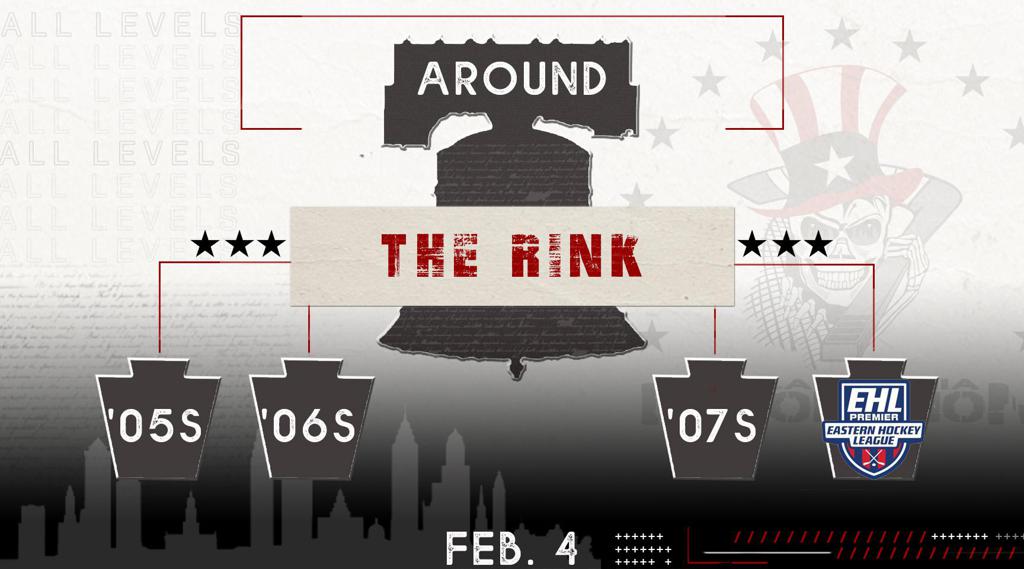 Owen Newhouse scored the only goal for the Revolution during the second period, but Philadelphia also surrendered three during the frame.

The third period was nothing short of entertaining after the Revolution proposed a comeback. Meli netted his second of the game and then Pavel Serhiayenka recorded his fifth goal of the season to bring the Revolution back within one goal (7-6) with less than 10:00 remaining in regulation.

The 87s sealed the victory with an empty-net goal, though. Prior to the loss, Philadelphia was riding a three-game winning streak. The EHLP team hosts New Jersey again on Sat. Feb. 8 for a 2:45 p.m. puck drop.

While the 2005s dropped both games over the weekend to the New Jersey Hitmen and Philadelphia Little Flyers by scores of 3-1 and 4-1, head coach Jon Houk’s squad outshot the foes in both contests.

Outshooting teams and receiving solid play from your goaltenders can be frustrating when a club loses. Houk believes that while the Hitmen have had their number this season – his ‘05s do contend well against the rivals.

“We have struggled with the Hitmen this season, thus far,” said Houk. “They are a very good team with plenty of skilled players, however, I think we match up well with them; we just need to find a way to put the puck in the net.”

The coach also mentioned a valid point and emphasized the importance of executing on special teams.

“I was happy with our play in the first game, although poor decision making was detrimental to us, as well as us not being able to capitalize on special teams,” said Houk.

The 2005s have another full slate this weekend. The Revolution are set to host the Westchester Express at 2:40 p.m. on Saturday, and then play two games on Sunday. Philadelphia will skate again vs. the Express on Sunday morning (11:50 a.m.) and then head to Pennsauken’s Flyers Skate Zone to take on Virtua at 3:15 p.m.

Houk hinted at how his team can rebound this weekend and collect victories.

“Work ethic, effort and heart are going to be the keys to our success this upcoming weekend,” said Houk. “Especially since we are dealing with a few players battling injuries and illnesses - it will give a lot of players the opportunity to step up and fill those essential roles.”

The 2006s also faced-off with the New Jersey Hitmen organization and were able to split their series over the weekend.

The Philadelphia Revolution took down the Hitmen by a score of 5-3, while Jake Laigaie led the way after the youngster netted a hat trick. Additionally, Luke Perfidio was no stranger to the score sheet, either. Perfidio found the back of the net twice and chipped in two helpers to total four points over the weekend.

On the backend, blueliners Kevin Koles and Brendan Schultz each recorded one assist and have played strong on the defensive side of the puck.

Rossi reflected on his team's play over the past couple of months.

“What impresses me the most is the continual progression we are seeing from the team,” said Rossi. Specifically, certain areas of emphasis in practice such as special teams. Our power play is clicking right now.”

As noted earlier in the post, special teams seem to be a common theme for the entire organization, and the ‘06s have taken full advantage of their power-play opportunities.

“We’ve scored on the power play in 15 straight games and in 19 of the 20 games,” added the coach. “We have fine-tuned our approach and their attention to detail is paying off."

Head coach Andrew Ross likely can’t complain after his team’s efforts from the weekend. The 2007s split with the No. 11 ranked “AA” team in the country, Reston Raiders.

The Revolution dropped the first contest, 4-2, but then answered back with a statement victory. The second showing witnessed Philadelphia shutout the Nationally-ranked squad by a score of 4-0.

Ross expressed that his team was arguably the better of the two competitors in both contests.

“We were consistent,” said Ross. “We outplayed them in both games, but came up short in the loss.”

Ross also believed that it was a “full-team effort” from all three lines, in addition to his defensemen and goaltenders.

The 2007s entail one game this weekend, which is against the Woodbridge Wolverines. The following weekend Ross’ squad participates in the New Jersey National Invite Super Series, where the Revolution are set to skate in five games.

Though, skaters Will Gregorio and Cam Ross won’t dress for the Super Series. The youngsters were proudly selected by the Jr. Hershey Bears for the Pee-Wee Quebec Tournament.