Philadelphia, PA – While the NFL’s Philadelphia Eagles came up short on Sunday in the playoffs, the Philadelphia Revolution Junior A team didn’t disappoint.

The Revolution not only earned their third shutout of the season over the weekend, but improved to 10-0-0 on home ice after sweeping the North Carolina Golden Bears at Revolution Ice Gardens. Philadelphia earned its first victory on Sunday morning, 4-1, and netted the game’s first goal, again. Keep in mind that the Revolution are now 18-1-0 when scoring first.

Head coach Jon Rogger’s squad found the back of the net twice during the first period while outshooting North Carolina 18-6. Saava Smirnov netted his ninth goal on the year to open the scoring and appeared to be one the Revolution’s best skaters all game. Captain Anthony Bench and Brayden Patricia picked up the assists on Smirnov’s goal, respectively. 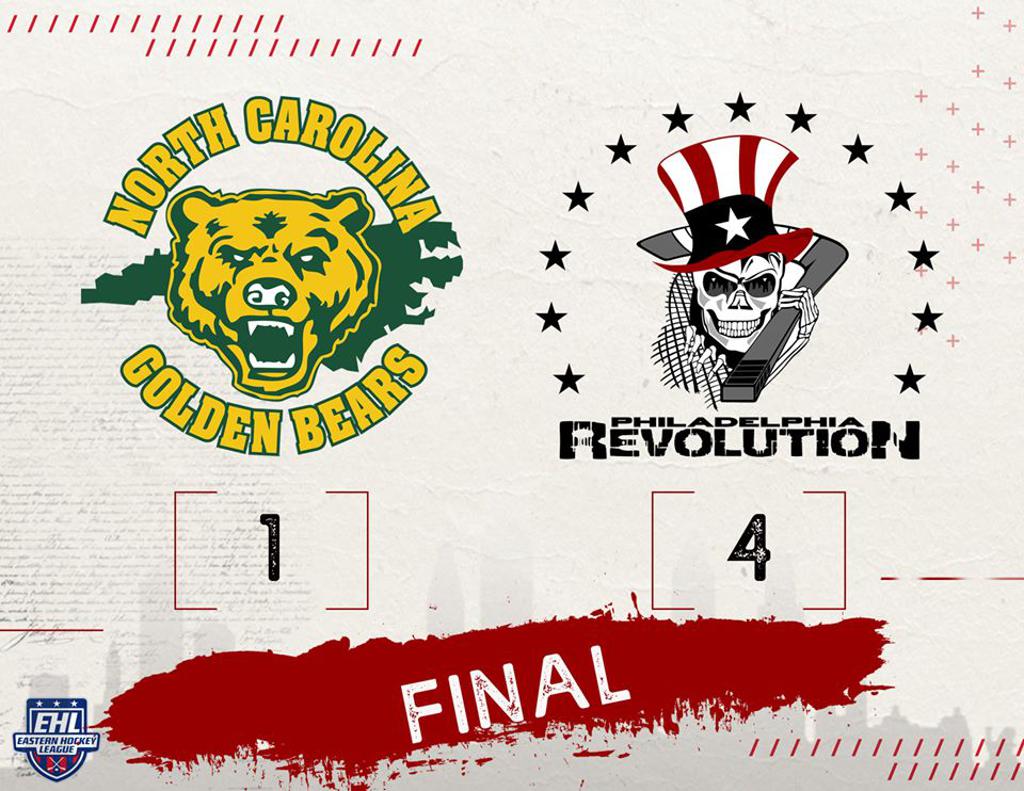 Carter Jones not only scored his first career Eastern Hockey League goal, but finished the contest with the game-winning tally.

“I’ve been working hard all season and just trying to come to the rink ready to work,” said Jones. “It just felt nice to get that first one.”

Coach Rogger was also excited for the 19-year-old.

“You know he’s excited and he deserved to play today. He was with the Premiere (EHLP) team yesterday and scored two goals, and that’s what we want to see when we send guys down is to see them develop and do well.” 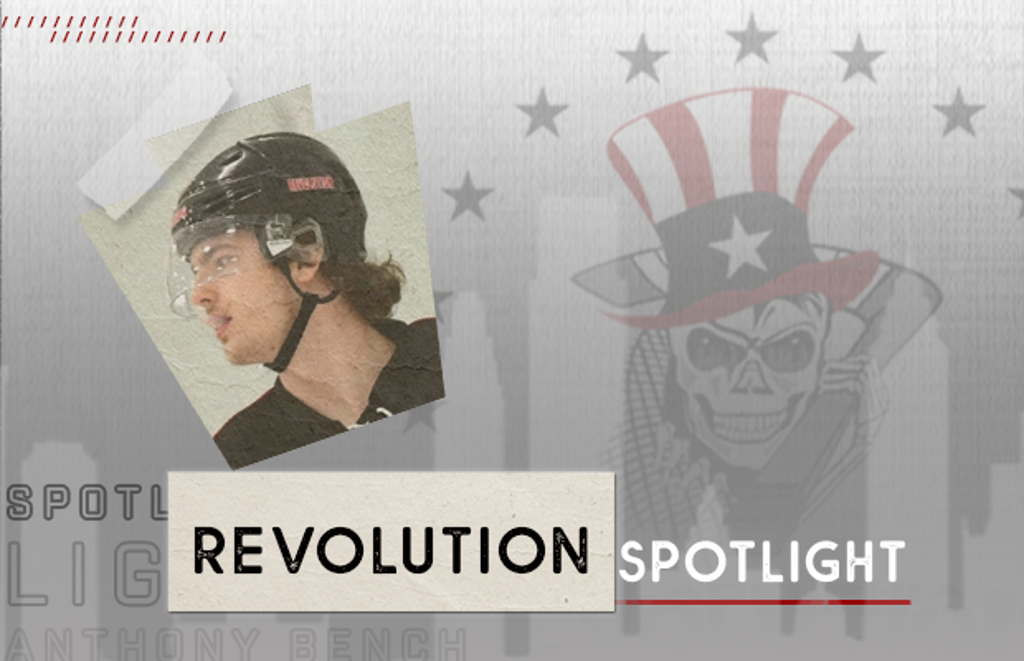 If one was following the game live on Sunday, fans might have noticed that the Revolution finished the contest with 61 shots goal. The City of Brotherly Love was denied often by North Carolina goaltender Ben Vutci, but coach Rogger believed the team could have executed their offensive attack differently. The Junior A coach was also asked if there was any “rust” apparent after the two-week layoff.

“I think it was a little bit of both,” said Rogger. “Obviously scoring the first two is something that you want; we always preach about having quick starts and playing for 60 minutes.

But I think anytime you put up 60 shots on net, you should get at least five (goals), so I give him (Vutci) a lot of credit; he played well, but I think the bigger issue was working to get traffic in front of the net. There were a lot of rebounds and we weren’t hard in the dirty areas.” 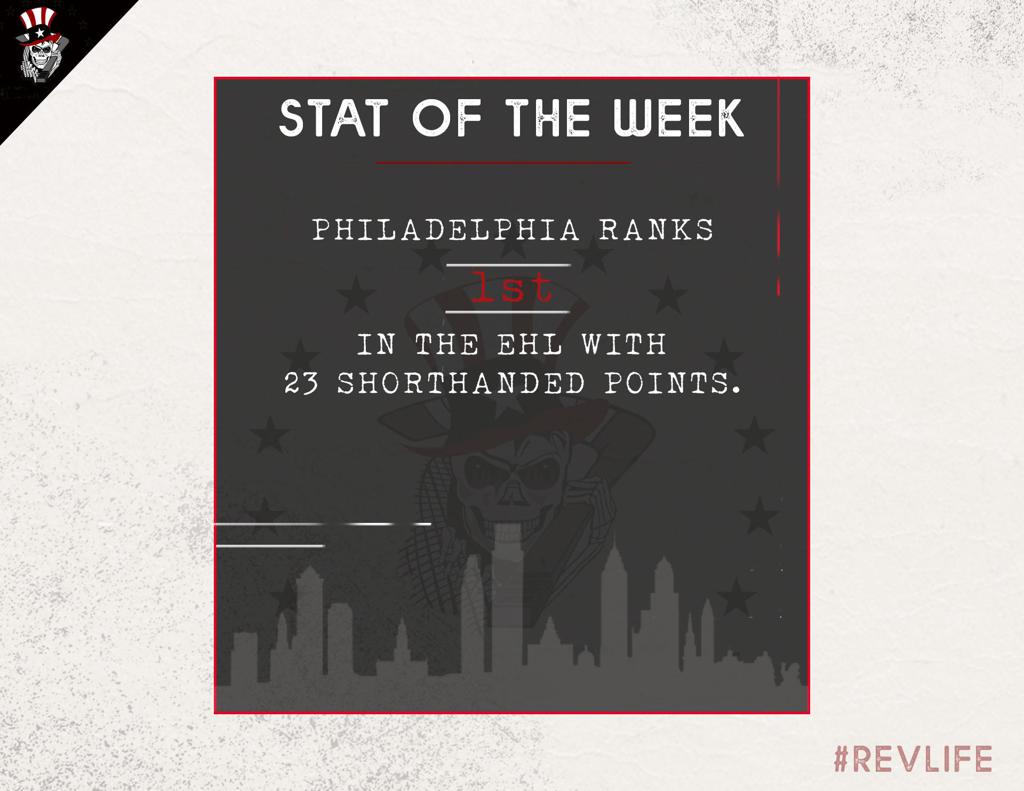 After being held scoreless in the second period, the Revs managed to beat Vutci twice in the third period thanks to Trevor Clemson and defenseman Michael Kubachka. Clemson, 19, now has five points (4g-1a) in seven games since joining the Revolution back in December, via trade.

Kubachka, 19, isn’t necessarily known for his goal-scoring but his backhand top-shelf goal argued otherwise. The 6-foot-4 blueliner entered the offensive zone on his forehand and drove the hard on a sharp angle while moving the puck to his backhand to beat Vutci high glove.

Duncan Nichols-Delay appeared in his seventh game for the Revolution and it seemed that almost half of the shots he faced on Sunday were quality scoring opportunities from the Golden Bears.

“You know what, he doesn’t play a ton but ever since the last four or five games – he’s been excellent,” said Rogger. “I think our guys almost just count on him no different from our other two (goaltenders) in that they expect that type of performance from him.”

Nichols- Delay earned the start again on Monday morning and improved to 7-1-0 on the year, while recording a 1.16 goals-against average and .943 save percentage on the season. Impressive, no? No. 35 also posted his first shutout of the season.

At times it's fair to say that not seeing as “much action” can be difficult for goaltenders, but the Calgary, AB native has been “very good,” per Rogger.

The Revolution completed the series sweep over the Golden Bears on Monday morning, after defeating North Carolina 5-0. As noted above, Philadelphia goaltender Nichols-Delay earned his seventh win and turned away all 20 shots faced.

Rogger’s squad posted three goals in the game’s first frame when Patricia, Clemson and Matt Pasic found the back of the net, respectively.

Patricia, 19, leads all Revolution skaters with 40 points (24g-16a) on the year. The 5-foot-11 forward finished the game with a natural hat trick, after scoring a goal in the second and third periods of play. Patricia now has seven multi-goal efforts in 2019-20.

The Revolution has allowed two or fewer goals in their last eight contests and are 7-1-0 in that span. Philadelphia travels Sunday to New Hampshire for the EHL’s fifth Showcase Series, presented by Bertucci’s, on the season.

The Revolution are scheduled for two games against the Valley Jr. Warriors and Seahawks Hockey Club, which are both played out of The Rinks at Exeter.