It’s easier said than done, though.

Yet, after the Philadelphia Revolution only recorded two wins in November the Junior A squad appears back on track.

The Revolution are riding a three-game winning streak for the first time since Sept. 13-29, and swept Team Maryland over the weekend at Revolution Ice Gardens. Philadelphia defeated Maryland 6-2 during Saturday’s primetime matchup and then 7-1 on Sunday morning. 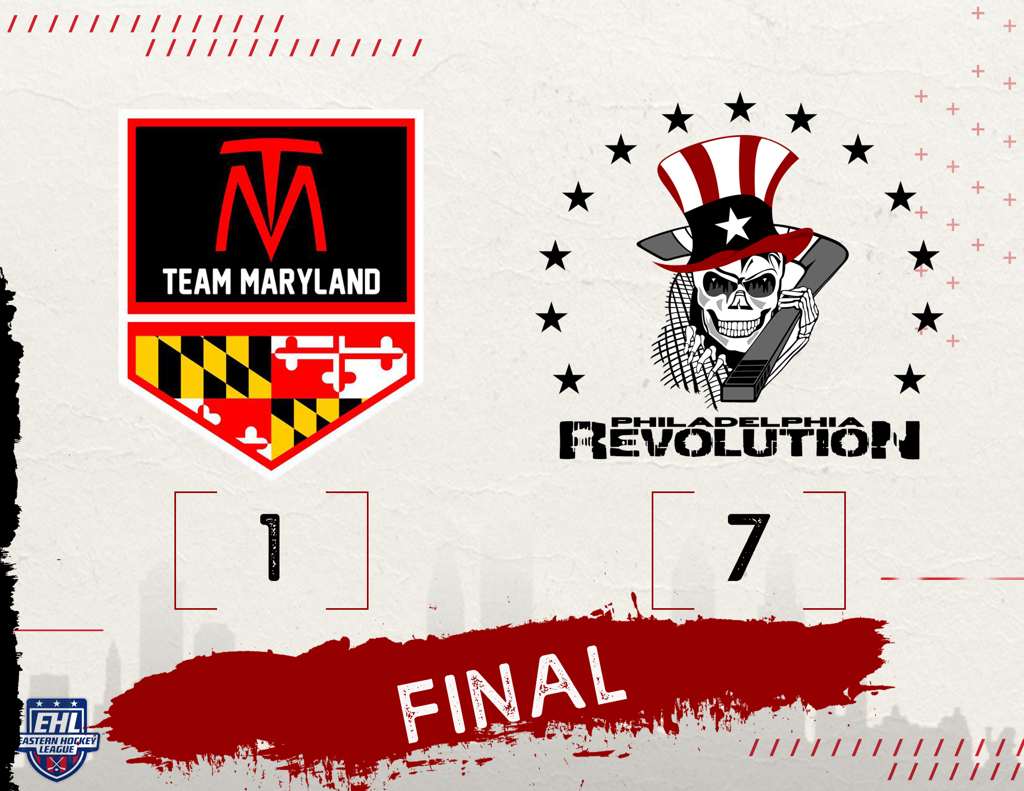 Newly-appointed captain, Anthony Bench and company wasted no time sending the message to the Mid-Atlantic Conference rivals when the Revs posted three goals during the first period on Saturday night.

In fact, the captain opened the game’s scoring just over a minute into the contest, which set the tone from that point on. Forward Justin Gusso then netted his first goal on the year off a deflection, which was later followed by a Saava Smirnov power-play goal. Smirnov, 18, led the team with three points on the night (1g-2a).

There was no questioning the Revolution’s positive energy from puck drop on Saturday night.

“We were excited to get back into our own rink and we knew these two points were important ones to pick up,” said Bench. “It was a good start to the game, and I think it translated well.”

“When we score the first goal, I think our record is pretty good and we just have that type of confidence,” said Rogger during the postgame. “Obviously, when your captain leads the way, the other 20 guys follow and that’s what we needed tonight.”

Roggers’ squad didn’t slam on the breaks after the impressive start, either.

Forward Matt Pasic opened the scoring for the second period with his 14th goal on the year, which also marked his fourth tally in three games against Team Maryland. While Team Maryland finally found the back of the net later in the period on the power play (5-on-3), goaltender Anthony Del Tufo was sharp all night.

The masked man finished the contest with 25 saves, but the bigger picture were the big and timely saves that No. 33 recorded throughout the night.

Oh, and Del Tofu displayed his Ron Hextall-like puck handling skills after he sauced a pass up ice to earn an assist on Mark Tosti's tally...

Assistant captain, Mark Tosti, finished off the second period scoring with a slick shorthanded goal. No. 10 beat Team Maryland’s netminder five-hole and put the Revs on top 5-1 heading into the second intermission.

As noted earlier, the Revolution’s high-energy start to the game was more than apparent. However, the team’s intensity to begin the game’s final frame was arguably better. Coach Roggers believed that notable characteristic the team displayed was credited towards the team’s preparation during the week.

“The old cliché is ‘practice how you play the game,’ and that’s what we did. A big part of that too is we haven’t played at home often this season, so guys are also excited to be back home.”

Philadelphia traded goals with Team Maryland during the game’s third period. Jordan Srgo put the icing on the cake for the Revs’ sixth goal on the night, which also marked No. 21’s eighth goal of the year.

Overall, the Revolution witnessed 13 different skaters ink their names on the score sheet on Saturday night.

Right where they left off…

If there’s a team that’s enjoying some Holiday cheer this month – it’s the Revolution.

The hungry squad took to the ice Sunday morning against Team Maryland and again wasted no time posting positive numbers on the scoresheet. The City of Brotherly Love recorded two first period goals with Sean Gary scoring his first tally since Oct. 21 to open the flood gates.

The newly acquired Trevor Clemson picked an opportune time to net his first goal since joining the Revolution last week. Clemson, 19, found the back of the net with less than one minute left in the first period, which clearly jump-started Philadelphia.

The Revolution followed the solid start to the contest with four goals in the second frame. Similar to Saturday night, Philadelphia proved that special teams can truly be a difference-maker. The captain, Anthony Bench, scored a shorthanded goal while Gary’s second goal on the day came on the man advantage.

Additionally, Mark Tosti found the back of the net for the second-straight game and Bench recorded the team’s fourth goal of the period with less than four minutes left.

Goaltender Duncan Nichols-Delay was efficient all game and tested by Team Maryland. The Calgary, Alberta native turned away 33 out of 34 shots and kept Maryland off the scoreboard for 55 minutes. Keep in mind that games are 60 minutes long.

As for Nichols-Delay, he’s now 5-1-0 with a 1.39 goals-against average and .937 save percentage. Impressive, no? Additionally, Nichols-Delay was announced on Tuesday as one of the Warrior Hockey Stars of the Week.

The Revolution head to Newington, CT on Wednesday for the EHL’s fourth Showcase Series this season presented by Bertucci’s. Philadelphia is scheduled to face-off with two New England Conference teams on the road trip.